The 2014 GB9 season will reach its climax as the tour returns to the Daventry Court Hotel, Northamptonshire for this season’s coveted British Grand Prix. 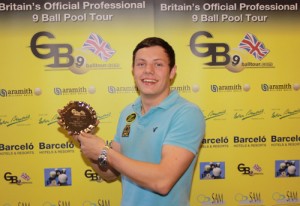 After some mouth-watering clashes across the season, the seventh year of GB9 competition is fast reaching its conclusion. We have once again seen many of Britain’s finest professional and amateur players alike battling it out to see who really is the best of the best. With four different players – Chris Hall, Mark Gray, Phil Burford and Imran Majid – winning this season’s four main events, little more proof is needed as to the strength in depth of the tour. Also with two regular GB9 players, Mark Gray and Karl Boyes, confirmed for Europe in this season’s Mosconi Cup, the quality of the tour professionals simply cannot be argued.

However, the future of the tour is well and truly in the hands of players both old and new. Now, more than ever, players need to come out and back what is still regarded as one of the toughest national tours on the planet, and few will argue that the tournament conditions at GB9 events are second to none. This however understandably comes at a cost, and GB9’s commercial agreements are not sustainable without the support of 96 members signed up for the 2015 season by the deadline of 30 November 2014.  Present GB 9 Ball Tour players and aspiring players alike are encouraged to support the tour and sign up for the 2015 season. All input from past, present and future players is welcome, and if there’s anything you want to see from your tour then make your voice heard. Contact This email address is being protected from spambots. You need JavaScript enabled to view it., or speak to a member of the team at the event. 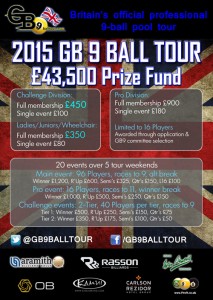 Sometimes players feeling confident will purchase themselves in the Calcutta so they have a chance to win a nice side pot if they finish high enough in the tournament. Most often, it is a spectator or other player that buys someone in the Calcutta. Many times, some friends will form a small “syndicate” and pool their money to buy several players so they have a few chances to get one of their players into the Calcutta money pay-out.

The player ALWAYS has the option to seek out their “Owner” and purchase half of themselves back. The winning bidder must accept half their bid in cash from the player and then each party owns half and are each entitled to half the Calcutta prize money if the player finishes in a pay-out slot.’

We hope that this experiment will add a little more excitement to the weekend’s action and players and spectators alike are welcome to participate if they fancy a flutter. You could even get together with a few friends to form a syndicate and bid on one or more players together. If you have any questions regarding the Calcutta, or any other questions regarding the 2015 GB 9 Ball Tour season, do not hesitate to contact a member of the GB9 committee during the weekend.

We will be bidding farewell once again to GB9’s spiritual Northamptonshire home after this event, so be sure to make it down to watch some of the best players in the business battling it out for one of the most coveted GB9 titles. Play begins at the Daventry Court Hotel early on the evening of Friday 7th November, with play throughout the weekend until the evening of Sunday 9th November. Entry to this event closes at midnight on Tuesday 4th November, so get your entry form in without delay.

Live streaming will be available during the weekend alongside the ever popular GB9-Live scoring system, giving a rack-by-rack lowdown on the weekend’s action. We hope players and fans alike will come out in force to back this last event of the 2014 season and, equally, the 2015 season.