The 2014 GB9 Northern Masters has reached its conclusion with Phil Burford, Mark Lunn and David Hopkin reigning supreme at the De Vere Village Hotel in Blackpool. 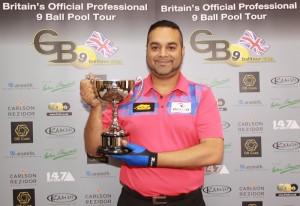 The final of this year’s Northern Masters was contested by two professional opting not to participate in the World Championship in Qatar, those being Mark Gray and Phil Burford. Both players had contested main event finals already this season, with Gray victorious in May’s Paul Medati Trophy and Burford the losing finalist in the season opening Midlands Classic.

‘Granite’ Gray came up against and defeated Adam Clarke 9 racks to 5 in his opening match as he started plotting his route to the final. His round 2 match saw him come up against Dave Simmonds, but he had no answer to Gray’s questions and succumbed to a 9-3 defeat. Gray needed one more victory to reach the single elimination last 16 stage, and it was Andy Worthington who stood between him and that spot. It was another 9-3 score here, and once again a score in Gray’s favour. The next man standing in his way was . He hoped his unbeaten Challenge Cup record coming into this event would serve him well here, but a 9-6 win to Gray suggested otherwise. His opponent was Sam Hirst, playing in his first GB9 event of the season. Gray turned on the juice here to secure his spot in the semi finals, and a 9-2 win saw him through to face Ipswich’s Craig Osborne in the final four. Osborne too had no response to Gray’s prowess, and a second straight 9-2 win ensured safe passage into his second successive final.

Burford’s route to the final began with a victory over one of the country’s best wheelchair players. Tony Southern gave Burford a real run for his money, but it was the Darlington potter who won through to the second round with a 9-6 win. Al Coton was the next man to take up the challenge, but a 9-1 win saw Burford storm through to the winners qualification stage to face Spaniard Juan Carlos Exposito. One of the regular international players now on GB9, he put a grinding halt to the Locomotive’s progress with a 9-4 win. This left Burford with one more chance to qualify for the last 16, and it was a chance he took with aplomb. Dave Nelson was the unfortunate soul to go out to Burford, with a 9-5 win putting Burford through to meet Arfan Dad in the single elimination stages. It was another 9-5 win in this game, once again on Burford’s favour, to put him into the last 8 and set up a mouth watering rematch against his victor two rounds previous, Juan Carlos Exposito. Revenge was a dish served well and truly raw, as Burford scored a huge 9-0 victory to put him into the semi finals to face Mark Lunn. Lunn was just one step away from his maiden main event final, but a gritty 9-6 win saw Burford into his second main event final of the season.

A high quality encounter was promised with a lot at stake for both players with the winner guaranteed to go top of the rankings. Gray achieved three break and runs in the match, but it was the resolve of Burford that held firm and won him the match 11 racks to 7. The win saw Burford ascend to the top of the ranking list with Gray right behind him. There is a 16 point gap now between second placed Gray and third placed Daryl Peach, so both Burford and Gray are in great contention to occupy the top two spots at season’s end.

LUNN STEPS UP FOR TIER I TITLE

The Rasson Billiards Tier I Challenge Cup final was contested by the same two players to contest the Tier II final at the previous event, with Adam Benn Smith looking to gain revenge on Mark Lunn from May’s event.

Smith began his campaign in the last 16 of the event, and a 9 racks to 5 victory over the returning Del Sim saw him into the last 8 where he was to face another dedicated GB9 Spaniard in the form of Albert Casellas. He hit the same scoreline once again, 9-5, in dispatching the Spaniard. His reward, if you can call it that, was the chance to end the remarkable winning streak of Damian Massey in the semi finals. With Massey beating Tony Burton, Robin Cripps and Shaun Storry on his way to the semi finals, his Challenge Cup streak stood at 13. It proved to be unlucky 13, however, as Smith finally managed to defeat Massey 9-3 and book his place in the final.

Lunn was lucky enough to draw a bye in the round of 32, so his first opponent at the last 16 stage wound up being Jez Graham. It was the ddefending Tier II champion who came out victorious with a 9-4 victory putting him up against Mark Foster in the quarter finals. Foster tried to push Lunn a little further, but it was Lunn who came away the winner by 9 racks to 6. His last opponent before the final was a fellow stalwart in the form of Andy Worthington. The two players gave it their all in a match that went the distance, but the Yorkshireman held strong to claim the match on the hill, 9-8 the scoreline taking him into a rematch of the Tier II final from the previous month.

The final was sure to bring out both players’ A-games, but it was Lunn who longed for silverware just a little harder. He took the match by 9 racks to 5 and, along with Adam Benn Smith, well and truly cemented their respective places in the top tier of the Challenge Cup.

Hopkin, like Lunn, was fortunate enough to have a bye straight through to the last 16. Here he faced Solihull’s committee member Steve Williams for a place in the quarter finals, and it was Hopkin who eventually broke away in a close game to go through 9 racks to 5. His opponent in the last 8 was wheelchair supremo Tony Southern, but Hopkin made light work of his challenge as a 9-1 thrashing put him into a semi final against the ever improving Dave Evans. The two matches couldn’t have contrasted any more than they did, with the semi final going right to the wire. It was Hopkin who held his nerve, however, and put him into his first ever GB9 final.

Nathan James started his campaign in the last 32, but also eliminated a committee member to open his account. His victim was none other than chairperson Andy Warden, who went down 9-3 to give James a place in the last 16 against Mark Collins. James’ ruthless form continued as he sent the Christchurch potter out of the tournament with a 9-2 win. The quarter finals saw him coming up against Harrow’s Paul Taylor, and it was the Welshman who continued his charge towards his own maiden final with a 9-5 victory. He then came up against a wheelchair player of his own in the form of Leicester’s Aslam Abubaker. He equalled his own record of being the only wheelchair player to make any GB9 competition semi final here, but his own maiden final was denied by James – the Welshman won through with another 9-5 win to set up the final against Hopkin.

The final was a tense affair as expected, with both players determined to take the winners salver home with them for the first time. It was Hopkin who stood firm in the final showdown, however, with a 9-6 win wrapping up the most successsful tournament ever for both finalists.

The third Pro Cup of the season saw Phil Burford and Craig Osborne face off in the final of a competition depleted by the British entries into the 9-Ball World Championship in Qatar. A high quality competition was still guaranteed, however, with some of the country’s best amateurs looking to take a share of the spoils.

Burford was handed a bye into the winners qualifying bracket where he faced a rematch of . In summary, the match was a carbon copy of the Northern Masters final with Burford coming out on top by 11 racks to 7. The only reward this time, however, was a quarter final spot. His opponent was his fellow North East comrade, Michael Rhodes. Both players served up a superb match, with Burford scraping through 11-10 to set up his THIRD meeting of the weekend with Mark Gray. Having chipped away at Granite twice already this weekend, he still felt there was some unfinished business to attend to. Burford won once again, this time by 11 racks to 9, to put himself one match and one win from going the whole weekend unbeaten.

Osborne also had a bye straight into the winners bracket where he too came up against Michael Rhodes. A ruthless performance saw Rhodes go into the losers bracket as Osbornbe win through 11-1. Dave Nelson was his opponent in the last 8, but his efforts weren’t enough to stop the run of the Suffolk Shotgun. Nine racks was the best Nelson could manage as Osborne scored his second 11 of the competition to go through to what turned out being a quite epic semi final against reigning Midlands Classic champion Chris Hall. In a match that lasted 2 hours and 26 minutes, both players kept one another in check and took the match to the distance. Osborne’s nerves of steel were the only thing to take him over the line, as a brilliant 11-10 win put him, like Burford, into his second Pro Cup final of the year.

With both players aiming for a unique feat of their own – Burford looking for a perfect weekend, and Osborne his second Pro Cup title of the season – the final was sure to be a tense one. The tension was reflected in the average rack time of just over nine minutes, but it was Burford who completed his unbeaten weekend as he defeated Osborne by 11 racks to 6 and take home his first Pro Cup of the season. 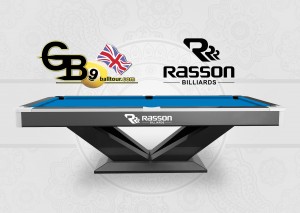 The GB 9 Ball Tour will return for the 2014 Southern Masters which takes place on 1-3 August at the Daventry Court Hotel, Northamptonshire. For more information on this event or to enter please see the event details page. Closing date for entries is midnight on the 1 July. After that date hotel venue accommodation will not be guaranteed and a supplement will be payable if other hotel arrangements have to be made.

In 2014 GB9 is proudly sponsored by Rasson Billiards, Simonis Cloth, Aramith Billiard Balls, OB Cues and Kamui Tips making the perfect combination of the very best equipment in the most outstanding venues.