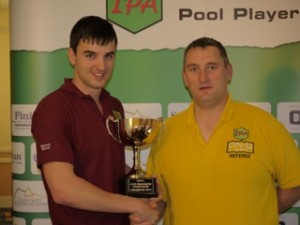 As the results filtered through the semi final line up saw only one Scott remaining with Dan Davy v Scott Higgins and Paul Dunkey v Simon
Ward completing the line up, but with a healthy audience watching the live steam and twitter and Facebook followers tuning in the pressure started to tell a little and the games did get a little cagier as per the norm though attacking was not thrown aside I assure you. Both matches went al the way to the wire with Dan Davy beating Scott Higgins 6-5 and Simon Ward beating by the samescore though only after plenty of uncharacteristic misses as they both tried desperately to fall over the finishing line.

Naturally, a tight final was expected though anything but panned out as Dan had zero luck early doors, which was pounced upon by Simon
who quickly took a 4-0 lead in the race to six, which must have built up some pressure (it would if it was me), though an early in off in frame five gave Dan a good chance to get on the scoreboard and sooth any nerves. Sadly, he broke down on the black and at 5-0 down, it just wasn’t looking like it would be his day with the scoreline in no way a far reflection of how he had played to get this far. A good break saw the favourable reds chosen by the comfortable leader but an unnecessary in off at last meant Dan could get off the mark and althoughit was 5-1, hey, everyone can dream of a comeback?  5-1 was soon 5-2 after a break and dish but that was the end of the mini comeback as Simon finished it off in the next to
pick up both cheque and trophy.

In conclusion, it was a great weekend with superbsurroundings, pool tables, and most importantly people, which added to qualitypool made it all worthwhile – and I am already booking my room for next year…….I suggest you do the same!