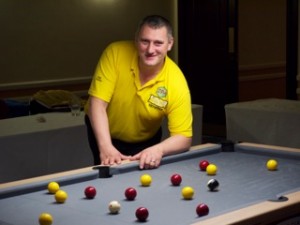 The International Professional Pool Players Association (IPA) are proud and delighted to announce the appointment of Phil Turner as Tournament Director.

Phil is a well known and respected face in the world of pool and has been for many years, qualifying as a referee back in 2001, and bringing over a decade of experience to the top table at all IPA tournaments in future.

In the world of pool his CV would be difficult to match let alone top,  as Phil qualified as an IPA referee  and was on the top table at the World Championships in 2006, staying there for all IPA events until 2010 when he became a GB9 Ball Tour referee andofficial, presiding over all the major finals.

Vice Chairman of the EPRA (English Pool Referees Association) he rejoined the IPA in 2012 and we are looking forward to makingthe most of all his abilities to improve our tournaments each and every time, and we are sure his boundless  enthusiasm can only be of benefit to players and officials alike.

Phil himself commented “ I have watched and admired the work of the new look IPA and the massive steps they have taken in such a short period of time, and am really looking forward to the opportunity of helping to take this new venture as far forward as we can for the benefit of the sport,
and I cannot wait to be a part of this progression”

IPA Chairman Kevin Barton, who officially announced the appointment to the players and press at the JLEC English Amateur Championship
in Bradford, was equally enthusiastic telling everyone “Phil will bring all his experience and organising skills to the IPA tour which will not only improve efficiency, but will also free up others’ time to focus on cementing our placeas the number one pool tour with the best facilities, prize money, and sponsors”.