China's Liang Wenbo burst onto the pro snooker scene midway through the last decade, reaching the World Championship quarter-finals in 2006 and making it to the final of the Shanghai Masters in 2009.

Apart from winning the World Cup in 2011 with compatriot Ding Junhui, the 26-year-old Liang has done little of note, struggling for consistancy, and as of last week his ranking was as low as 32. 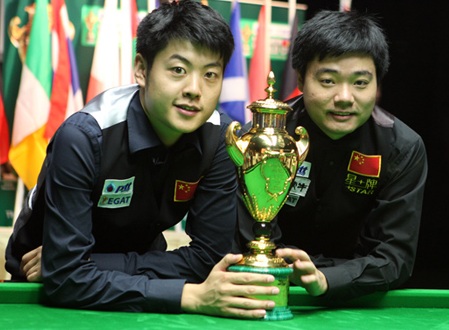 Today at the Zhengzhou Open (Asian Tour Event 3) Liang once again showed his immense talent and claimed his first individual title on the World Snooker tour, completing a simple 4-0 victory over fellow Chinese player Lu Haotian in the final.

15-year-old Lu had his best chance in the first two frames, but broke down on 39 and 43 respectively. After that Liang stepped into top gear and made runs of 90 and 61 to win the last two frames to complete his win.

Lets hope that this isn't once again a flash in the pan for the entertaining and we see him competing in the latter stages of the big events once again.

Next up for Liang is a tricky tie with another tough Chinese player, Li Yan, in the last 64 of the International Championship. If he wins his first match he could potentially face Ronnie O'Sullivan in the next round, a tie to savour!

The International Championship starts this weekend with coverage on EuroSport. Check out the draw here.