Rod Lawler is not a name you usually think of when asked about veteran campaigners in the snooker world. But the 41-year-old managed to roll back the years at UKPTC3 at the South West Snooker Academy and beat several opponents ranked higher than him and go on to dispatch Marco Fu 4-2 in the final to win his first professional title.

Since rejoining the main tour earlier in the season via Q School, Lawler hasn't looked back and performed brilliantly to reach the last 16 of the Wuxi Classic and at this event in Gloucester he beat ranking event winners including Stuart Bingham, Stephen Lee and Dominic Dale on route to the title.

Lawler started the final against Fu brilliantly knocking in a break of 114. The following two frames were shared before Hong Kong's no.1 returned the favour with a 102 to level at 2-2. Lawler took the scrappy fifth frame and emphatically sealed victory with a 69 to win the match and celebrate his first professional victory with his Dad.

"I'm so proud to win a tournament carrying ranking points for the first time," said Lawler. "I played some good stuff during the event and when I won two matches 4-3 earlier today to reach the semi-finals, I allowed myself to think about winning it.

"If I hadn't got through Q School I would have got a real job and just played snooker for fun. It's amazing what can happen and it's justified my decision to carry on.

"I am playing the best snooker of my life and if I keep this up I'm a handful for anyone. I'd love to qualify for a few of the big venues this season."

It's also good to see Marco Fu back playing to near his best. Regular followers of the snooker events know that Fu's form is the hardest to predict so lets hope this gives him a good boost going in to the Shanghai Masters which starts next week.

It was a relief to his fans to see Ronnie O'Sullivan back for his first professional match at the SWSA this weekend but unfortunately he couldn't reach anywhere near the level he got to on route to last May's World Championship title and he lost in the first round 4-3 to Simon Bedford.

Lets hope for his sake and his many followers that he can get his game back in to shape before the International Championship next month as there is a huge amount of ranking points up for stake in the Chinese event which shares the same format as the UK Championship.

Once again though congratulations to Rod Lawler, lets hope we see more of him in the months to come! 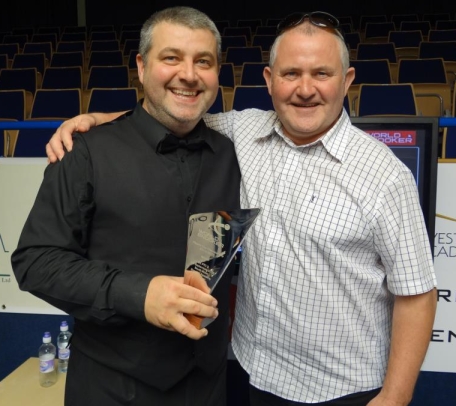