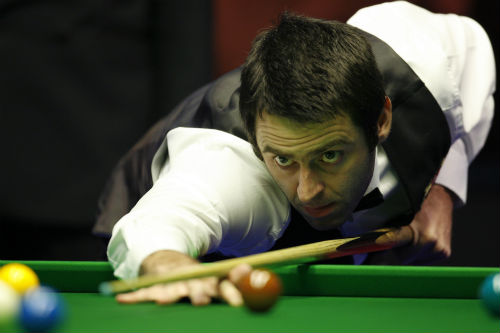 RONNIE O'Sullivan regained the world snooker championship with an 18-11 victory over Ali Carter at the Crucible Theatre in Sheffield.

The Rocket, who had enjoyed the better of the opening day of the final where he closed 10-7 returned and swiftly extended his advantage to 14-7, punishing the mistakes of Carter.

But just as some were wondering whether or not the final would be concluded with a session to spare Carter who had shown glimpses of the fluency that had seen off Judd Trump and Stephen Maguire finally stopped the rot as he pieced together enough points to reduce his arrears to 14-8, and then fired in a 105 to close to 14-9.

Drawing the support of the Crucible crowd Carter then made O'Sullivan pay for a missed red as it trundled it's way up to the baulk end of the table with the cue ball in close attendance. Dispatching the red to the "yellow" pocket a vital 53 followed as Ali claimed the frame to drag himself back into contention.

With just one frame to go before the conclusion of the session Ronnie would either lead by five frames or be in the same positon as he was at the close of play on day one of the final with a three frame advantage. The answer came swiftly as O'Sullivan sent a long straight red to the top corner pocket and followed up with a decisive 64 to take a 15-10 advantage into the closing session.

Resuming O'Sullivan quickly rattled in a 70 break to once again stretch his lead to six frames. To Ali's credit he continued to fight hard and pouncing on O'Sullivan's missed black to the corner replied with a 64.

Three times a champion already O'Sullivan moved confidently to within a fourth world crown as he knocked in a 46 to leave himself just one frame from victory. And he wasn't to be kept waiting long to hold the famous trophy again. Keeping the pressure firmly on Carter he waited patiently for his opportunity with some shrewd tactical play. Tucked under the top cushion he spotted a red to the centre, as he cued the red and delivered the cue, the red rolled to the pocket and dropped in. The table was now set for a championship winning break and Ronnie was determined not to let slip from his grasp. As a fan shouted out his support to Ronnie from the crowd O'Sullivan sunk the last remaining points of the final to seal victory with a 61 break.

As Ali Carter extended his hand in congratulations to Ronnie, a young man also made his entrance. It was Ronnie's son, Ronnie Junior who was swiftly in his fathers arms and then holding his father's hand as he accepted the trophy.

And so ends another world championships with Ronnie O'Sullivan holding the famous trophy aloft. With it he joins a select club of players to have won at least four world titles in the modern era which comprises of Ray Reardon, Steve Davis, Stephen Hendry and John Higgins. A select group, which now has a new inductee.