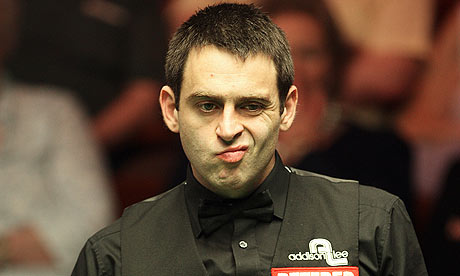 RONNIE O'Sullivan cruised into the final of the World Championships with a 17-10 victory over Matthew Stevens.

Resuming with a 15-9 advantage ovber the Welshman the Rocket needed only fifty minutes to put paid to the challenge of the man who has contested two world championship finals but has yet to wear the world crown.

Stevens though to his credit gave us a glimpse of his sublime break building skills as he rolled in a long red and proceeded to make a 116 break to reduce his deficit to 10-15. The Welshman had first opportunity in frame 26. Left a cuttable red to corner from distance Stevens could only look on in horror as he missed and then saw the cue ball sty in close proximity with the pack of reds. Dropping in the red O'Sullivan duly fired in a total clearance of 130 to leave himself just one frame from victory.

Stevens though was playing his part in an exhibition of high class snooker and after drilling in a long red looked set for an extended stay at the table, only to miss a yellow to the middle. With the balls in prime position it looked as if Ronnie would complete victory in one visit, but in potting the pink he inadvertantly cannoned into a red, and saw it trundle its way into the middle pocket. Stevens though failed to take advantage and O'Sullivan clipped in a mid length red and followed with the blue. As the reds began to disappear so Ronnie moved confidently towards his target of 17 frames with the help of a 35 break. With one red on the table and the scores poised at 40-37 in favour of the Englishman Ronnie snookered Stevens behind the black with the lone red in the baulk "D".

As Matthew negotiated his escape he could only look on in agony as he saw the cue ball finish close to the final red. Cutting the red in Ronnie dispatched the last few balls for 26 points and a 17-10 victory over his gallant opponant.

And so we arrive at the final, and it is an an all England clash between two people who contested the 2008 final as Ronnie O'Sullivan and Allister Carter will meet in a best of 35 frame showdown to decide who will be the 2012 world champion.