China in his hands 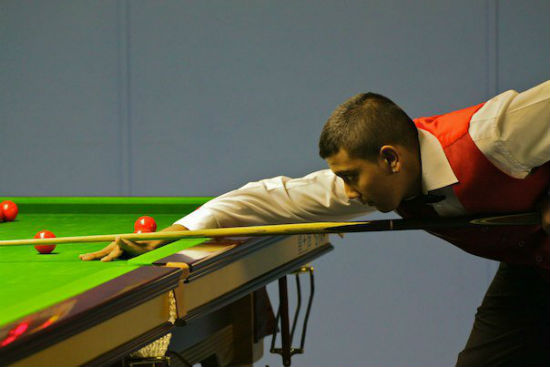 CHINA-bound Kishan Hirani stepped up his preparations for the IBSF World Under-21 Championship with victory in the sixth and final leg of the Cuestars South of England Championship Tour.

Competing in his first Cuestars tournament for a couple of years, Hirani booked a play-off spot and a chance of taking on special guest Stephen Lee at the Cuestars finals day in Swindon on Sunday, June 3.

The 19-year-old, beaten 2-1 by Shepherd in the group stages, accounted for second-placed Martin Wallace 2-0 in the last-eight and fellow Welsh international Callum Lloyd (Rileys, Newport) 3-1 in the semi-finals.

“In the group stages, I played quite decent to get through,” he said.

“It was a long day. After I beat Callum it was 7.30pm and we had a couple of hours to get home. So me and Sheppy decided to split the pot and do a one-frame shoot out for the points.”

Hirani is hoping it will be third time lucky when he jets out to China in July for the world junior championship.

“I’ve played great every year but lost both times to the eventual champion,” he explained.

“Those two experiences will hold me in good stead for China. The cream of the crop from around the world will be there so hopefully the form comes in.

“I’m looking forward to it very much.”

Meanwhile, a semi-final appearance was more than enough for Jon Charlton to claim top spot in the rankings.

Charlton, who is based at Aldwick RBL, Bognor Regis, but lives in Camelsdale, Haslemere, Surrey, ended the season with a 20-point advantage over Wallace.

In his five outings this season, the consistent Charlton has won one, lost in the last-four three times and gone out at the quarter-final stage once.

Founded 18 years ago by director John Hunter, Cuestars runs grass-root snooker tournaments across the South of England and South Wales.

Competitions take place on Sundays between October and June, and cater for players aged eight to 80 - and in some cases even older!

All Cuestars tournaments are played off scratch. There are no handicaps. Cuestars uses a round-robin format leading to a knockout.

Website: cuestars.uk.com. E-mail John Hunter: This e-mail address is being protected from spambots. You need JavaScript enabled to view it.