As Chairman of the International Professional Pool Association, and on behalf of the Committee, I am extremely proud to announce new sport changing developments, as our quest to take the sport to heights begins to take shape. 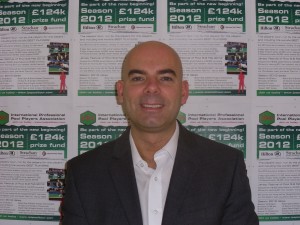 Firstly, we are delighted to announce Horizontv as our new media partner, whom we will be working together with, on our first televised event in March, which will be broadcast on Sky Sports. Adrian Battersby, Head of Technical Services at Horizontv said “Horizon are thrilled to be involved in what promises to be such an exciting event for 2012. We are also convinced that our coverage will be something that will do the sport itself some real justice in a way that has not been managed before”

This brand new IPA Invitational event will carry a ‘winner takes all’ first prize of £10,000, and will feature the worlds premier exponents of 8 Ball pool, including 6 World Champions. The television coverage will be extensive and will also coincide with the launch of the radical new image and style that all future IPA events will follow.

In further developments, the worlds most prestigious Premier League for 8 Ball pool will be launched during 2012, and will be produced by our new partners Horizontv, for television.

This is just the first of several new partnerships that the IPA is working extensively to develop, which will drive the sport forward and create new, exciting opportunities for the players.

The IPA is, and will remain, the home of the premier 8 Ball pool events in the world, and the place where the sports world champions and professional elite compete.