Story and photo by Ted Lerner

(Fujairah, UAE)–World 8-ball supremacy, along with $35,000 in cash, is assured of a home in Taiwan for the next year, as Fu Che We and Chang Jun Lin both won their semi-final matches this afternoon at the Fujairah Tennis and Country Club.

The all-Taiwan final between Fu and Chang will begin later today at 5pm local time(GMT +). The match will be a race to 11, alternate break. 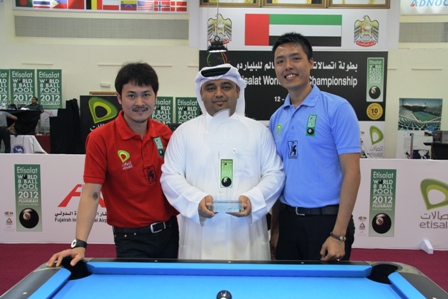 Chang’s semi-final match vs. Chris Melling was much closer but the 26 year old from Taipei put in a brilliant performance in overcoming the confident Englishman. Melling raced out to a 2-0 but then saw Chang, with his deliberate style, crawl back in the match.

Chang took the lead at 4-3 and never looked back. Melling had trouble all afternoon with the break, consistently coming up dry. Chang took advantage and built up a 6-3 lead. Melling battled back to 6-5, but Chang broke and ran for a 7-5 lead. Melling again broke dry in rack 13 and Chang pushed the lead up to 3. Melling had one last fight back, moving the score to 8-7. But Chang held his nerve in rack 16 to get over the finish line first.

The WPA will be providing up to the minute coverage of the finals on its website, www.wpa-pool.com, including live scoring of the match , as well as blow by blow coverage via the WPA’s Twitter page, @poolwpa.