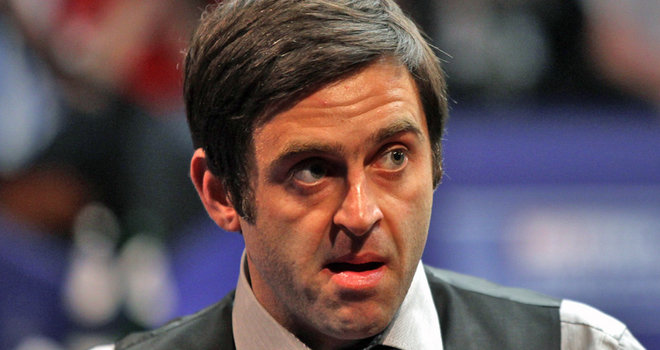 Neil Robertson (R): Opened an early 5-3 lead over Ronnie O'Sullivan in their quarter-final

Ronnie O'Sullivan struggled to find any real rhythm as he slipped behind early on in his Betfred.com World Championship quarter-final against Neil Robertson.

The three-time champion could not repeat the heavy-scoring form that earned him a standing ovation during the middle session of his second-round win over Mark Williams and, when Robertson pinched the final frame of the opening session to lead 5-3, it was a justified lead for the Australian left-hander.O'Sullivan had looked likely to make it 4-4 overnight, but after reaching 58 he missed a red, using the rest, and when presented with the opportunity to return to the table, failed to sink a regulation blue to the middle.That allowed Robertson, winner in Sheffield two years ago, to make a short run of 25 before returning to mop up blue, pink and black after O'Sullivan had struggled to escape from a snooker.The standard of the contest was patchy, with both players producing flashes of brilliance but plenty of mediocre play too.With Robertson a smart tactician, O'Sullivan allowed himself to be drawn into some exchanges when against other opponents he might have looked to dictate play.Robertson had breaks of 59, 58 and 100, while O'Sullivan also had a round century, 93 and a 58.Carter seizes initiativeFresh from beating Judd Trump on Monday afternoon, Ali Carter returned to claim a 5-3 lead over Welsh qualifier Jamie Jones.Jones had a 92 as well as the highest break of the session with a stunning 127 in frame four.But the 24-year-old world number 36 from Cimla also produced some messy play and when Essex man Carter fired in an eighth-frame break of 76, his fourth run above 50, it gave him a lead that his form had merited.Tuesday also saw the all-Welsh battle between Ryan Day and Matthew Stevens swing towards former finalist Stevens as he moved into an 11-5 lead after the second session.After a high-quality start to the first session, the second was a lower key affair, with just two half-centuries to Stevens as he moved to within two frames of the semis.