(Fujairah, United Arab Emirates) — It’s never over until it’s over. Liu Haitao must surely be singing the praises of that universal phrase about now, after the hard nose Chinese turned a desperate situation around at the very last moment, and came back from an 8-5 deficit to shock Taiwan’s Ko Pin Yi, 9-8, and move into the semi –finals of the World 8-ball Championship in Fujairah, UAE.
The race to 9, alternate break semi-final, which will begin at 1:30 PM(GMT +4) on Friday, will be Liu’s first ever trip to the final four of a world championship. There the 26 year old will face Taiwan’s red hot Fu Che Wei, who notched his third convincing victory of the day in his quarterfinal match when he blitzed the Netherland’s Huidji See 9-3.

The cross straits rivalry is one half of what promises to be an entertaining and intriguing day of championship pool in Fujairah. In the other semi-final, England’s Chis Melling, who played brilliantly in handily defeating the Philippines last bet, Roberto Gomez, 9-4 in the quarterfinal, will take on Taiwan’s Chang Jun Lin. Chang, Taiwan’s number 1 player, easily beat Germany’s Oliver Ortmann,9-3, in his quarterfinal match.

The down to the wire thriller with Ko was Liu’s second 9-8 match in 24 hours. In the round of 32 on Wednesday night, Liu just squeaked by Hungary’s Vilmos Foldes. Today in the round of 16, Liu knocked out Karol Skowerski, who had shocked defending champ Dennis Orcullo the night before. 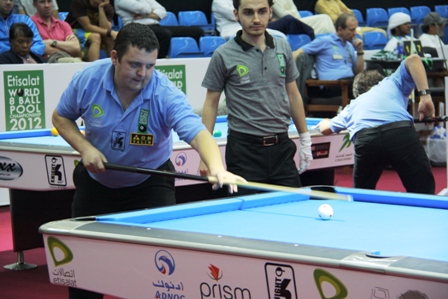 Melling, though, very nearly let his chances slip away earlier in the day in his TV table match against the UAE’s best player, Salah Al-Rimawi in the round of 32.

Against Ko Liu was facing certain elimination as he was down 8-5, with Ko at the table after breaking and sinking a ball. In professional 8-ball, as has been proven all week, sinking a ball on the break virtually guarantees a run out so Liu had no reason to think he’d even get a chance. Besides, Ko hadn’t trailed in the entire match and, as he’s been doing all tournament, was playing superbly, using an incredibly powerful and precision break shot to take command of the match. For two days Ko had been one of the favorites around the arena to get to the final.
Ko, however, badly missed his first shot and Liu pounced, clearing the table. Liu then broke and ran to get to 8-7 down. He then played the rack of his life, deftly breaking up several difficult clusters while potting balls to tie the match. A high pressure break and run gave him an unlikely spot in the semis.

If today’s performance is anything to go by, Liu’s opponent Fu is certainly going to be a tough nut to crack, though. Fu started off by pounding Korea’s Hwang Yang, 9-0. Fu then manhandled the Philippines Lee Van Corteza 9-5. Fu didn’t have much problem handling See either.

While anything can happen in the wide open game of professional 8-ball, England’s Melling surely has to be one of the favorites coming into the final four. The 33 year old Brit has been one of the world’s best players for the last 18 months. Years before turning to the American game of pool, he played English 8-ball where he became one of the greatest ever to play the game, winning every major title several times. Melling brings a fearless and powerhouse style to the arena every time out, and oozes confidence.

Melling, though, very nearly let his chances slip away earlier in the day in his TV table match against the UAE’s best player, Salah Al-Rimawi in the round of 32. Al-Rimawi came back from 8-6 down and had the break in the last rack. Unfortunately for the home fans, Al-Rimawi broke dry. Melling stepped up and cleared the table for a gut wrenching 9-8 win.

That was all the spark that Melling needed as he next rolled over Thorsten Hohmann 9-4 in the round of 16. He then took that momentum into his impressive victory over Gomez.
“Except for a few bad racks in the middle, I played awesome,” Melling said. “I’m confident I can win this thing. The break is massively important. And I can pot as good as anybody. I just can’t make silly mistakes.”

As evidenced by his performance in three matches today, Chang certainly will pounce on the slightest misstep. Chang grinded out a 9-5 win over Bruno Muratore, 9-3 over Carlo Biado, before crushing Ortmann.

The WPA will be providing up to the minute coverage of the semi-finals and finals on its website, www.wpa-pool.com, including live scoring of all matches, in depth articles on the goings on posted several times a day, as well as blow by blow coverage of big matches via the WPA’s Twitter page, @poolwpa.