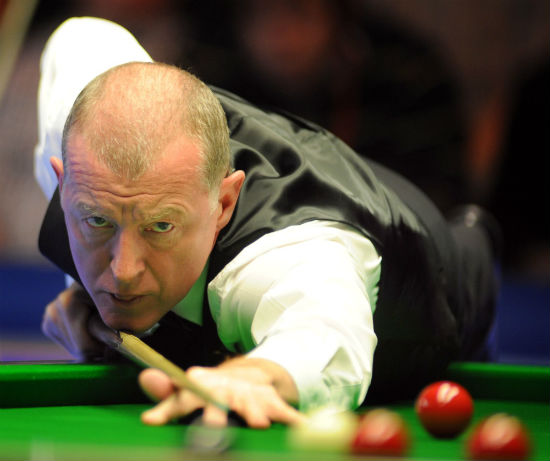 Steve Davis believes that running the Sheffield Half Marathon this May will help him prolong his snooker career.

The 54-year-old snooker legend is joining other green baize stars such as Shaun Murphy,  Peter Ebdon and Michael Holt for the 13-mile run in Sheffield on May 27, to raise money for the Paul Hunter Foundation.

And six-times World Champion Davis, now playing his 34th consecutive season on the main tour, hopes he’s still got plenty of time on the professional circuit.

“It has made me fitter mentally and physically,” said Davis, currently ranked 39th in the world. “Next season is going to be very tough, playing in all the qualifiers and PTC events. There’s a lot of travelling involved and sometimes we play three or four matches in a day. So the fitness will definitely help. I’m going to keep the running going after the Half Marathon and maybe aim to run it every year.

“The training has been gruelling. Going the distance at the World Championship leaves you mentally tired and there were times when I lost half a stone over the 17 days. But that’s nothing to compare to the physical tiredness I have felt after running - it’s genuine exhaustion. When you are running uphill your body is telling you to give up and your legs are going, and you have to overrule it with strength of mind.

“There will be a lot of people dressed as bananas or pantomime characters running past me. I could finish last, it will be close between me and the guy in a deep sea diving costume with lead boots.”

Next Wednesday, Davis competes in the Betfred.com World Championship qualifiers at the English Institute of Sport – Sheffield. He’ll face either Joe Swail, Daniel Wells or Ben Woollaston in his first match, and if he wins that he’ll face Dominic Dale for a place at the Crucible.

“The nerves have started, which is a good thing,” said Davis, who reached the quarter-finals of snooker’s biggest event two years ago. “It’s the one event each season which makes me feel uptight and insular, and I enjoy that because it shows how much is still means. I will be giving it everything.

“At best, each match is 50/50, they are all good players. I just have to hope I can string some performances together.”

Davis also had some words of encouragement for his son Greg, who will attempt to qualify for the pro circuit when he plays in Q School in Sheffield in May. He added: “It will be fascinating to see how he gets on. I know he is practising his head off to be ready and I just hope he enjoys it. He’ll have more eyes on him than most of the other players, but hopefully he’ll be able to relax and play well.

“He wouldn’t let me anywhere near the venue so I won’t be able to watch him. The only way I could get away with it would be to disguise myself as a referee! But I’ll be on the phone to the venue every five minutes to find out how he’s getting on.”

The Betfred.com World Championship qualifiers from April 5 to 15 at the English Institute of Sport - Sheffield. Legends like Stephen Hendry, Jimmy White, Steve Davis and Ken Doherty will be battling for a place at the Crucible. TICKETS FOR THE QUALIFIERS ARE ON SALE and it's a fantastic chance to see star players fighting for a place at snooker's Theatre of Dreams. Prices range from £5 to £7.50. To book call 0114 256 5567 or visit www.arenaticketshop.co.uk

Please note that we are only selling tickets for the matches in the Badminton Hall (April 7-12 and 14-15). This does not include the phase for members not on the tour which is played in the Academy. From April 6, tickets should be purchased at the venue or by calling 07881 437385.

The qualifiers can also be viewed online with our live streaming service. See www.liveworldsnooker.tv

For more information on the Paul Hunter Foundation go to www.paulhunterfoundation.org