The GB 9 Ball Tour returns this weekend after its winter break as the 2012 edition of the Midlands Classic is contested at the Barceló Hotel in Daventry, Northamptonshire.

It’s at times like this when we all reflect back on the previous season. 2011 really did have it all – shock results, emotional victories and the introduction of many new players, many of whom proved they would be more than capable of cutting it with the big guns in years to come. Given what we’ve seen in the previous four seasons of the tour, we are sure to be in for another year of breathtaking world-class pool. For 2012 the GB 9 Ball Tour is proud to include many features both old and new, all combining to create what is regarded by many as the toughest national pool tour in the world. These include:

GB9 Chairperson Andy Warden is excited at the potential this forthcoming 2012 season has to offer. “The tour just keeps getting better and better, and the word is spreading fast.” he said. “In 2012 as well as the usual plethora of UK 9-ball professionals we also have a number of overseas players making the journey to chance their arm.  We have EuroTour regulars coming over from both Italy and Spain as well as a number of Irish players, so it’s terrific to see the GB9 name spreading outside of these shores.”

GB9 founder and Tournament Director Lee Rigby echoed the excitement from Warden. “I always look forward to the start of the season. We improve GB9 every year and most of that hard work happens in the close season between November and February so in some ways it’s a relief to get the season underway. The most exciting thing for me is to see the new tour players in action. Many of them are new to American pool but are already accomplished in other cuesports, so it’s always interesting to see how they will fare against our established professionals.”

The race for the coveted British Number 1 spot turned out to be quite a thriller last year, with London’s Imran Majid pipping Glasgow’s Jayson Shaw to the post in the final event of the season. Here we highlight some of the top name players who will be fighting for the lion’s share of prize money and medals this season.

The Maharaja could now rightly change his nickname to ‘Mr Consistency’ given the season he had last year. His performances throughout 2011 lead to a bittersweet statistic: combining the Pro Cup and main event competitions, he reached a remarkable nine out of ten possible semi-finals, reaching the final in five of those events – yet he didn’t win a single one. Whether he can make it over the final hurdle in an event this season is yet to be seen. As the reigning British number 1, however, there’s no doubt he’ll be hard to beat.

Scotland’s highest ranked player on the GB 9 Ball Tour at number 2, the Wizard can be proud of what was a tremendous 2011 campaign which saw Shaw taking home a total of 7 medals – 2 gold (including the season ending British Grand Prix), 2 silver and 3 bronze – in the season. The 2010 World Blackball Champion is known for his frightening speed around the table, and there are few players that truly find a comfort zone when playing him. Whether he is capable of taking home seven medals again will be known at the end of 2012, but it goes without saying he’ll be looking to take home more than the two golds won last season.

Ozzy could hardly have done more in 2011 to prove just how capable a cueist he really is. Four final appearances with two tournament victories (including one in the Northern Masters) sees him sitting pretty as British number 3. He will also be buoyed by an unforgettable trip to China, partnering Allison Fisher in representing England at the World 9-Ball Mixed Doubles Championship and coming away with a 3rd place finish. The Ipswich shooter is knocking on the door of both Majid and Shaw, and few would bet against him replicating last season’s form and picking up where he left off in 2011.

Few would argue against Chris being the in-form player coming into this first event of the season. His record internationally is growing with every tournament that passes, and his positive showing on his debut Mosconi Cup appearance means the world saw once and for all what talent the Magician has. Fresh back from a semi-final finish at the World 8-Ball Championship, he will return to Daventry at the peak of his game with the bounty on his head surely higher than that of any other player.

The 2007 9-Ball World Champion will himself admit that last season was a disappointing one on GB9. Winning the fourth Pro Cup of 2011 turned out to be as good as it got for Peach, with his British ranking moving down to 12th. His Pro Cup ranking of 4th, however, should be enough to remind himself that he is just as capable of taking a gold medal home as his professional counterparts. He will be looking to significantly improve on his medal tally from last season and only dazzling pool from the Dazzler will ensure that happens.

The man simply known as Guapo will, like Daryl Peach, admit to not quite living up to his ability in 2011. The highlight of his GB9 year was taking the silver medal home at the third Pro Cup of the season back in August. His main event finishes however left a lot to be desired, and nothing better than two last 16 finishes all season has seen his British ranking slide down all the way to 24. The Blackpool local, and former World 8-Ball Champion will be looking to kick-start his form once again on GB9 and secure his first title since the British Grand Prix back in July 2010.

Mark had what can only be described as a bizarre year in 2011. His international form was excellent, highlights of which being a terrific semi-final finish in the World 9-Ball Championship and a EuroTour victory in the Treviso Open back in December. This said, Granite saw his usually stubborn record at GB9 events get severely chipped away throughout last season, finishing no better than the quarter-finals in any main event and failing to win a single Pro Cup match all season. He will no doubt be buoyed by his current form, but whether or not the former British number 1 can bring it back to a domestic level will be apparent in the coming months. 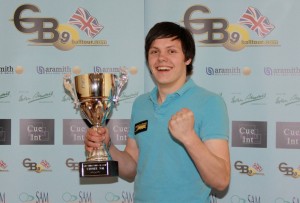 Reigning Midlands Classic champion Phil Burford, recently back from the USA, will return to Daventry to defend his hard fought title from 2011. Entry to spectators is free as ever. If you’ve not been to an event before, come on down to witness some truly world class players playing world class pool – rest assured, you won’t be disappointed.

In 2012 GB9 is proudly sponsored by Barceló Hotels, SAM Leisure, Simonis Cloth, Aramith Billiard Balls and Power Bridge which together make the perfect combination of the very best equipment in the most outstanding venues.